Scone With The Wind (aka Afternoon Tea at Palm Court, London)... 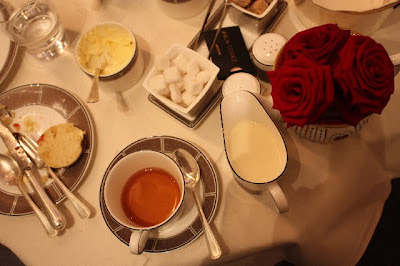 There's a lot you could associate with those Brits, promiscuous kings, Shakespeare, bad teeth, Royal family, The Thatcher Pout...Afternoon Tea. Itty Bitty About to have a fitty, bite sized, sip smacking in silver against china, Afternoon Tea! The mere thought of it can get me going, and when I do, forget the cream, I get a wee bit clotted myself. Tea's empire is always the hegemon of my heart, and their most honoured of past times - when done well - is simply anglolicious. Nobody has ever asked me to lie down and think of England. But if they did, it would probably go a little something like this: Afternoon Tea at Palm Court at The Langham, London, which won the Tea Guild's blue ribbon. But then again, they've had over 140 years to get it right. I don't know how I did it, but on a mere midget of a jaunt to London I managed to surgically remove myself from Selfridge's and Liberty's for just long enough to tell you about two different divine Tea's, and here is your fabulous first. 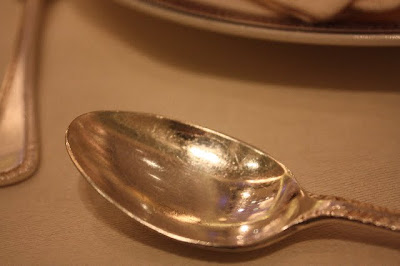 Legend had it that all of this sugar-sandwiched frenzied-fancy began with the 7th Duchess of Bedford and a little 'sinking feeling' she had in the afternoon. Poor love. Well, what else is a gal to do when low blood sugar comes a-knockin at 3pm to say How-do-you-do, but have her footman deliver all her tea making equipment, posthaste, with some bread and butter up to the confines of her room privee! Those were the ways, and those were the days.

But we make do with what we can, and why pine for the life of a Bedford Blue Blood when you can do it like this, old world style with some new world currency... 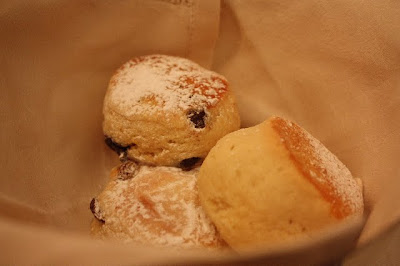 Upon arriving into a room that was like a jewel box in its glitter of gold and glass and light, I was informed that there would be a tiny wait for any afternoon tea order, as the scones were just being baked at this very moment. After an internal eek!! over the thought of fresh, warm, still carrying the oven's breath scones - glossed over with a composed and nonchalantly - ohhh alllriiight, I was seated at a great vantage point to take in a room full of The Stylish and The Powerful, Taking Tea. A chilled flute of Louis Roederer Brut Premier NV was brought over as I struggled through one of life's toughest choices: do I get the Wonderland Afternoon Tea, or the Bijoux? When all else fails, go with the priciest. At 59 Pounds a decadent pop, I was positively impoverished and breathless with anticipation. The bespoke Bijoux was ordered and underway and it was a tantalising tale in three agonising Acts: 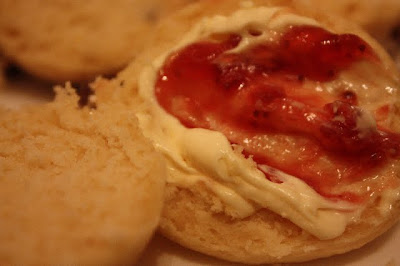 Enter, Stage Left, The Three Best Scones I Ever Had In My Life. Still warm, and light, and moist and fluffy, and delicate and dainty in their beautiful basket cradle. I oohed and aahed as I selected the first little victim to gobble up. I started with the basic Bedford Scone and decided to take it from there. A little pre-jamcream bite told me all the texture wonders of a long forgotten world. I swooned. I fluttered. I fed. Buttery and delicate and beautiful, SconeNirvana. I cut it in half, smeared the clotted cream on the bottom and then the strawberry on top, in careful, generous globs of gluttonous glee. Fucking Hell. This scone hurt, it was simply wonderous, it melted into itself inside my mouth and I was simply scone with the wind. And English cream...it's the Mr Darcy of all Cow products. Smooth and deep and whispering vanilla. It goes in waves, the taste - just like the memory. Scone with the wind, indeed... 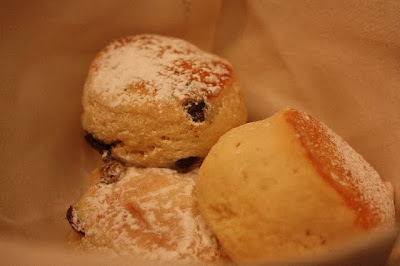 ...But tomorrow is another day - and if I had thought the plain scone was to be the height of my fickle fancy, I was very gladly wrong. The champagne soaked raisin was divine, buttery, innocent in white scone floured flesh with startling little spikes of champagned sweetness, gently exploding as you bit into them, deepsweetsharp. One murderous molar after another!
But what really did me in was the chocolate and marinated orange. Strewth! I thought they'd gotten too cocky for a second, a bit like Coppola in Part III, a wee bit too sure of themselves. No way this was going to work, it was going to be too much, especially with the jam and cream. Oh, wrong! Deliciously wrong! Decidedly, contrivedly and alivedly wrong! This is one of the best chocolate and orange tastes to ever go down in my mouth, and believe me when I say much ChocolateOrange has gone down before. It was a wicked chocolate, dark and so sanctimoniously saucy, and CrownJewelRichRichRichness spiralling into and through one of those most startling in citrus sharp and profound oranges I have ever known. Almost a burnt orange, but a singing orange and a serpentine cocoa. It left a Union Jack all over my tongue.
And it was just the barest of smidgings of ChocolateOrange within the beautiful scone body, it didn't overpower it, it just gave you the faintest but the most fervently finalising murmurs of flavour. Just a little edge, that was so liquifying to body and mind, to affect and reason. Forget Queen and Country, i'd die for this. A scone as pretty as Scarlett and as deep as Rhett, and burning forever in my memory like Tara. The bakers here really understand their scones, and it's always wonderful to try something seemingly so simple that completely alters all the experiences you've hitherto had - like really good bread after so many ho-hum slices. Something you didn't know could possibly be done better. Try the scones at the Palm Court and, frankly my dear, you will give a damn. 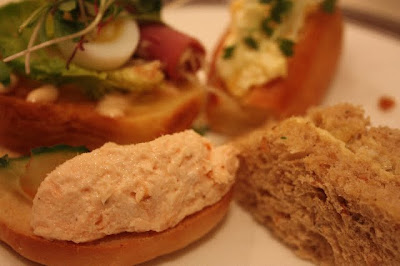 The sandwiches were lovely enough, but not as enjoyable as i'd hoped they'd be. Because this was the bijoux tea, they'd crafted them to appear different and jewel-like. I'm a bit of a sucker for simple, plain, soft little sandwich parcels, the kind you get at most afternoon teas. That type of sandwich was part of the Wonderland but not the fancier Bijoux. The combinations were thoughtful and the flavourings were intense, my favourite was the duck egg with mustard cress and the Scottish salmon. 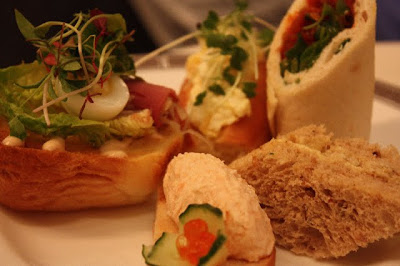 I was in AmandaHeaven during the whole bloody experience. A bit giddy on the champers and totally revelling in impeccable and gently attentive service and the magical succession of perfectly pretty plates of this and that that kept returning to me like a trusted tide. It is luxurious, sumptuous but subtle, opulent and dreamlike. A constellation of imagination. 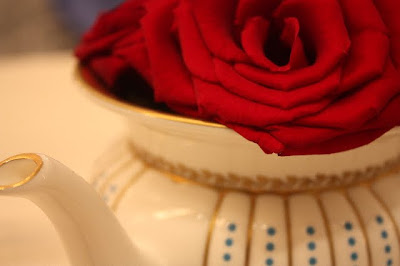 Tea pots with the lurid flush of blood red English roses, the perfume kept wafting through the champagne high, grounding me back and into my beautiful table, spread in white and checkered with cups and saucers and plates and spoons. Closed eyes. A sigh. Cheeks in flushed and hurried red. 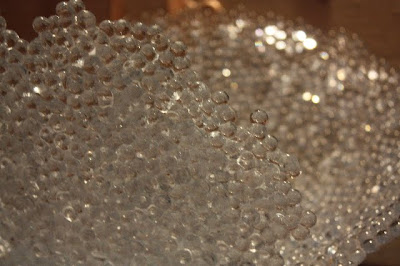 The whole grand room is a gentle play on light, multicoloured glass fracturing it into beams of emerald green and sapphire blue. The space is hushed, padded, gentle clankings here and there. It is a space for watching and thinking and especially for sinking - into yourself. The experience is precious, it adorns you. Flowers and silver and lights and glass and heavy, cushioned furnishings, protected and treasured, indulgent and extravagant. Sophisticated. The atmosphere is voloptuous with its own imagining, gently, soft like a whisper, and silently sybaritic - that is, until a travelling foreigner, let's say an Aussie, sitting alone and in want of some manners, emits a deep and very audible grunt from a pleasing pause in pineapple. 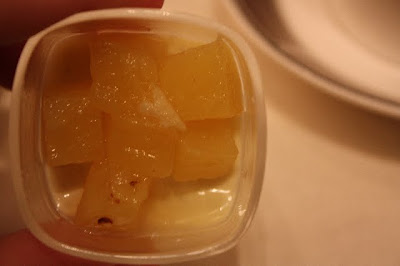 Argh! Just when I thought panna cotta had been done to Italian death, enter this little number in pineapple to teach me the error of my epicurean ways. It was a memorable pineapple, suspended somewhere between the natural, clean and clear taste of the naked fruit with a subtle infusion of BurntSugarCream. A little pot of pristine pleasure. Gleaming and glazed cubes of curious pineapple crowning a gentle panna cotta cream - and this as a precursor to cake. My inner delight exited my body, took 3 dimensional form and occupied one of the empty seats beside me, too much! 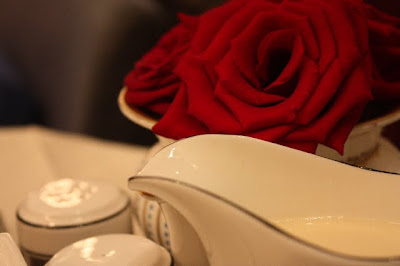 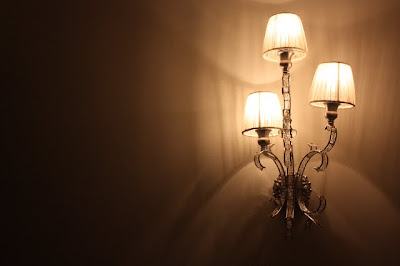 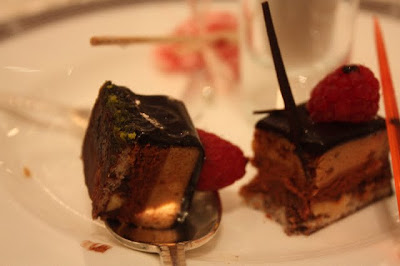 and cake! As polished as these desserts look, I must give the Palm Court a tongues up, as none of them was too sickeningly sweet. They all had body and flavour and richness, usually when desserts have too much sugar, they don't taste that different from each other. Each of these jewels was beautiful in its own unique perfection. 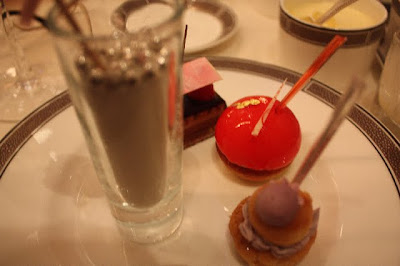 Dainty, this was about the size of my nose, which probably isn't that dainty actually. It was a delicious little sponge packed in tightly under some creamed icing. Buttery and gentle and beautiful. I broke it down into about five mouthfuls to draw it out. 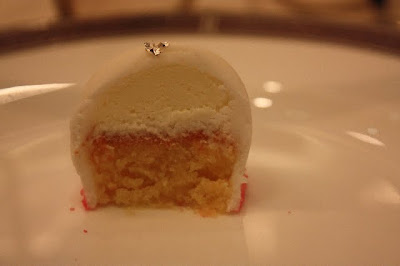 This little like-a-lollipop was a stylish affair in intense rose macaroon. Candied and moist and creamed inside, as sweet as the little pink bow tied beneath it. 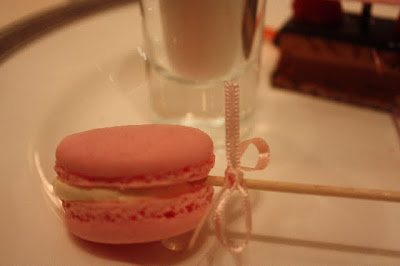 And this spunky cross section here was my absolute favourite. Pert and berried in cream with moist sponge underneath. 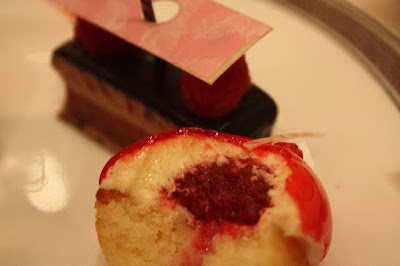 Embarrassingly, I tried to eat the sparkly stuff that this lollipop was suspended in, only to find out it was purely decorative. But, like a good glutton I requested an additional dish off the High Tea menu (you'd like more cake? yes, I would), the carrot cake. It was a thimble sized, moist orange buttercreamed beauty. Gone in about two bites. 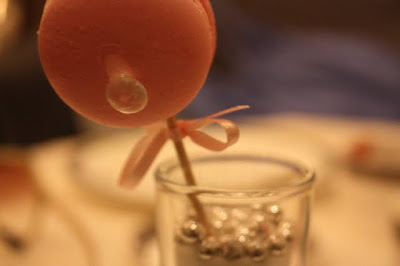 The Palm Court is probably a definitive London experience. As much as it is girly, there were groups of well suited men discussing things I was oblivious to amid my sugared-champagne haze. There is an impressive list of tea, but the Earl Grey I ordered was lackluster for me. It was an assam, and as far as I am concerned assam usually tastes a lot like its first three letters. The tea was a bit dull, not very bergamoted. If you do make it to the Palm Court there are far better tea options, such as Darjeeling Silver Tip White. But really, Alice's had spoilt me for other tea selections forever. 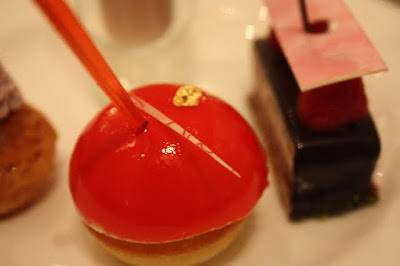 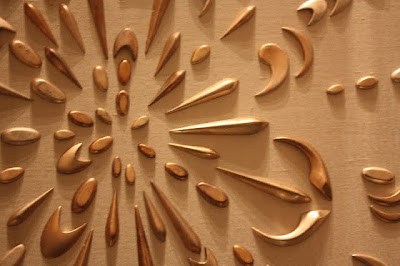 Palm Court at the Langham Hotel, London...Indeed.
Posted by amanda at 2:03 AM