We've all had that moment, you know that dreaded happening. It usually occurs in your childhood or early adolescence, and not well into your adulthood, like it did for me. That awful point in time where the realisation hits you, like the blades of a cold shower on a frozen winter morning: that the entire time you've known them, your family has never been normal! This whole time, they were complete and utter nuts, and I never even knew. Sure, being one of the only Lebanese kids at the kind of Presbyterian school that makes you wear regulation undies, there were some hints along the way, but honestly, it's only lately it seems to have fully sunken in. All of that brazen Bechara kookiness is evident in the way we eat and the way we cook. We have 4 fridges for a family of 5, and if Dan, I and 20 or so of my nearest and dearest drop by to say a quick hello to my folks, it's nothing for my mother to cater for all us at a moments notice, and have enough for doggie take home bags. At most houses they offer you a casual cup of tea with a biscuit, at my house the casual offer is for some juicy and tender eye fillet and garlic sauce....with a side of lasagne. Dan loves it, but my metabolism is still reeling years later. There has been talk that my gallbladder, liver and pancreas are arranging some kind of class action. 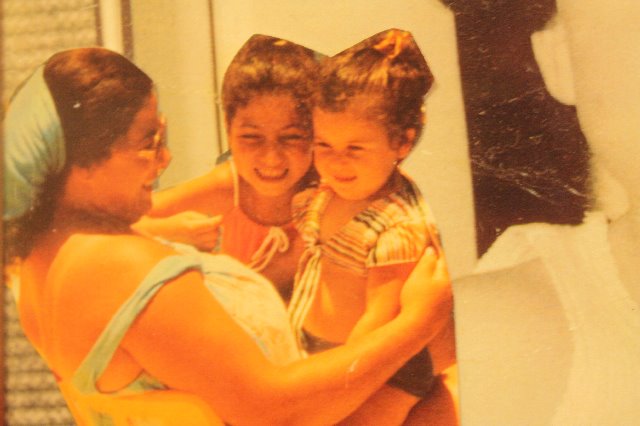 Lebanese mothers...you've got to love them. They are warm, generous and almost carousingly caring. Their love of you and their need to show it is unrelenting, like a shadow just out of your range of vision. They feed your stomach while stroking your hair and obviously looking at you with that not so latent wistfulness that says 'don't let me die without grandchildren'. No Lebanese mother is worth her weight in salt if she doesn't own the kind of deep freezer than can store several dead bodies, I think my aunty Frida's is still the biggest I have seen. Lebanese mothers amaze me, and, with glorious bias, none more than my own. She's a funny woman my mother, silent, deep, and perpetually able to frown, and smile at me simultaneously. I always knew she was an amazing cook, I grew up happily in the familiar flavours of her boundless talent. But it was only after inviting lots of friends over for dinner, that one dish kept drawing startled praise from my non Lebanese friends. Mum's Koussa (Arabic for Zucchini) it seems, is the Real Deal, and even if you're too scared to make it, this is how it's done. 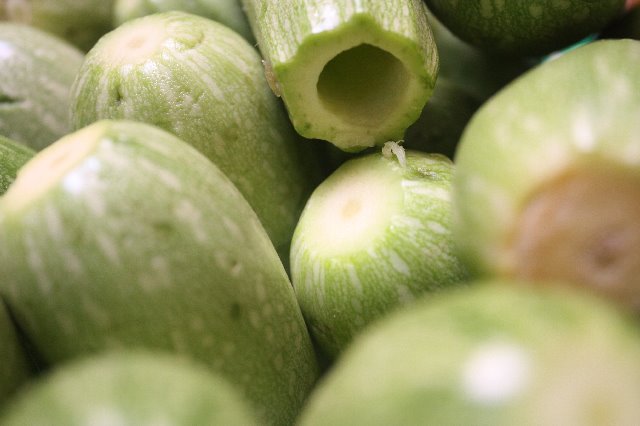 This bombtastic, spicy, swirling, Dervish Dancing tomato broth based, white zucchini RiceLambParsleyTomatoSpiceSpiceSpice stuffed stew/soup thing is Yummerificnous. It's warm and gentle and filling. It consists of beautiful plump little zucchinis, full of divinely steaming flavour, bopping up and down and drunkenly into each other like stoned toddlers in a bewitching broth of tantalizing tomato. It has a richness from the lamb that beautifully grounds the sharpness of the parsley. So hard to describe well in words, it's simply more than the sum of its parts. One bowl always leads to three. I love it even more the next day when some of the broth becomes more congealed into a thick, almost porridge like tomatoed stew. Mmmm. So, if you want to teach your taste buds how to scream 'Ya Habibi', this is what you'll need first... 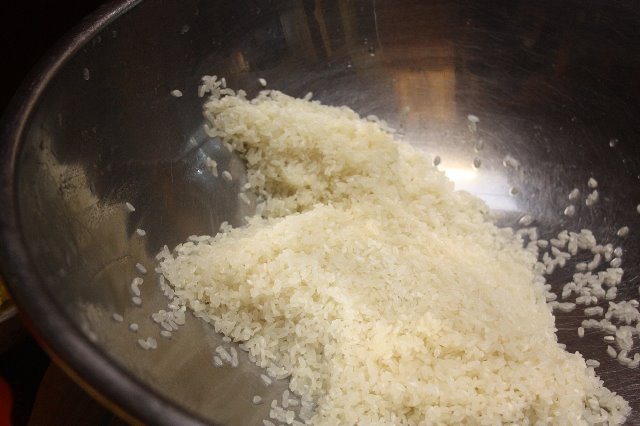 You're going to have to go to a Lebanese Grocer. If you've never been, a world of untold riches of smell, sight, taste and sound (from all the noisy Lebs shopping there) awaits you. Don't be daunted, pretty, pretty please give it a try. You'll see the biggest, brownest most gorgeously golden cashews, roasted to salty perfection and so fresh you'll never shop at coles again. Lebanese nuts are simply the best (grow up), they're like gobsmacking jewels, giant pistachio, alabaster almond, so fresh, all the good oils intact and alive and kicking . You'll see mint, vibrant dream in green mint, mint in big, thick, lustrous bouquet bunches, and parsley so alive and free from that skanky supermarket condomish plastic sleeve embrace. You'll smell spices you can't even name, and the fruit...I love Lebanese grocers, quality and freshness are guaranteed. Abu Salim in Greenacre is amazing, but you don't have to go Wild West to find an authentic one, they're dotted all over Sydney. From The Grocer:
a little utensil for hollowing out the zucchini insides, its like a very thin scoop, very cheap.
white zucchini (about 20 for) the thinner ones are nicer, mum says.
white rice (not long grain, it expands too much), 20 tablespoons
3 bunches or so of Lebanese/Italian Parsley (the flat, not curly kind)
8 firm red tomatoes you'll chop these up, slicer dicer style.
Lebanese Spice Mix (cinnamon, hot pepper, black pepper, cumin etc, same used in tabouli)
Optional: Tender Lamb Shoulder (about 2 cups full, don't know the grams), the lamb gives a richness that seeps into the whole soup beautifully, but if you'd prefer vegetarian, which mum makes on occasion, it tastes as lovely, for vegans, use olive oil instead of ghee). Lamb mince is also okay, Lebanese don't use it because the shoulder diced yourself is fresher and leaner. Beef can be used, but it's dryness means that lamb is preferable.
3 tablespoons (heaped) tomato paste
3 tablespoons (heaped) ghee (ghee is clarified butter, used extensively in Arabic and Indian cooking, Ayurvedics believe it's a very nurturing food, warming for the body and good for strengthening and energizing)...you can use normal butter but it doesn't taste the same, ghee has a rich less creamy taste than butter and really suits savoury rice based dishes.
Salt (duh) 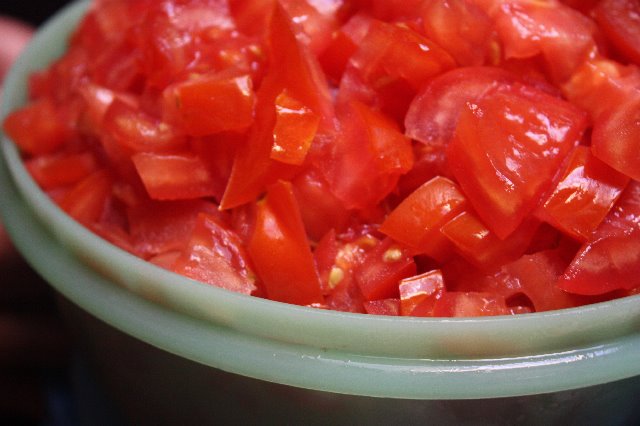 Preparation takes a little while, but once you've got it all laid out, it's just a matter of stuffing and boiling and watching, and Abu Bob's your uncle. Wash everything first, like a maniac, Lebanese people wash vegetables about 3 times thoroughly. For the zucchini,  scalp the little knobby thing off the end (it's too hard to chew) and then hollow out gently the zucchini. The tube the utensil makes in the flesh should be able to fit your little finger (I giggled a bit during this lesson, Mum rolled her eyes). 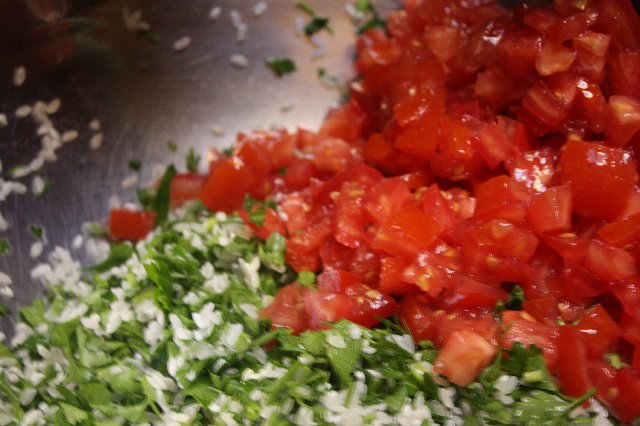 Then make the rice mix. About a tablespoon of rice for each zucchini, so 20 tablespoons in this case. Rinse the rice (3 times), mix in the finely chopped parsley and diced tomato. At this stage get a massive pot (I am sorry I can not scale these measurements down, they are massive and just inherently Lebanese, these people do not understand the concept of a serving for two, they never will) and fill it up about 3/4 full with water, add to this the three heaped tablespoons of tomato paste and allow it to come to the boil. If you want to be puritanical about it, get a spoon and keep scraping off throughout the whole cooking process the thickened tomato residue that rises to the surface, mum says this gives the broth a much cleaner, sweeter taste. 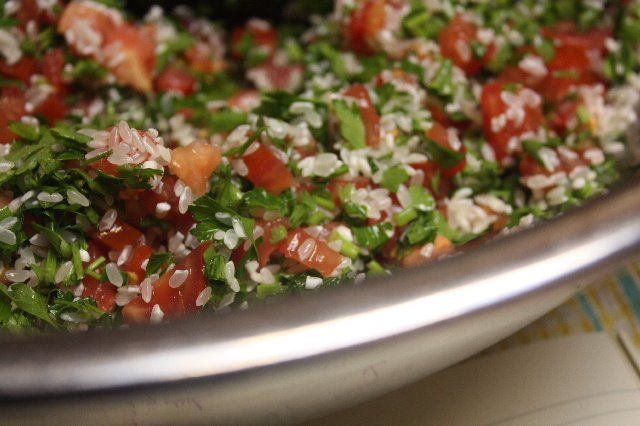 Your mix should look roughly like this, add, to taste, the spice and salt. Mum is anal about the fact that you must taste it and there can be no measurements. Even if you have spit out the uncooked rice, you must taste...God, why do Lebanese recipes end up including the advice that One Ought to Spit... Leave your mix and your zucchini to the side. Take the lamb shoulder, if you're using it, cut out the fat and dice it into small pieces. Take this, or the mince ready made, and add to a frying pan with ghee, you only want to brown it a little before adding it to the mix. Once browned, mix it in with the parselyricetomatospice and then take the zucchini and stuff each one with the mix. Stuff only 3/4 full, as the rice expands in the cooking, you want to leave a bit of room at the end (snorted this time, no giggle). 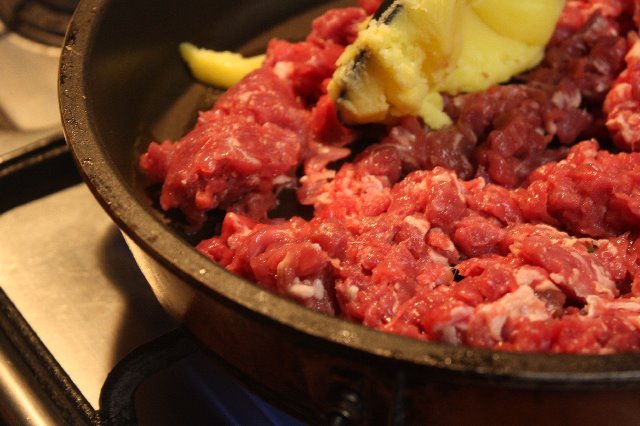 The ready to go little green flavour rockets bound for your tum should look a little something like this. Be gentle when you add them into the boiling broth. Turn down the heat on the stove. Don't ever stir with vigour, you don't want the zucchini pockets to break, just push down the top of them occasionally so they're rotated around a little. As they approach the end the colour of the zucchini begins to come become paler, it's almost an hour cooking, you want to test one by spooning into it, it should be firm zucchini enveloping a well cooked, maddening rice stuffing. If you over cook the zucchini the skin starts to break down and it loses its shape and leaks out the rice. Mum usually adds a cup of the stuffing to the tomato broth itself to thicken the soup out. Do this if you like, but don't add too much. Any extra rice she cooks in a little side pot as a separate dish. 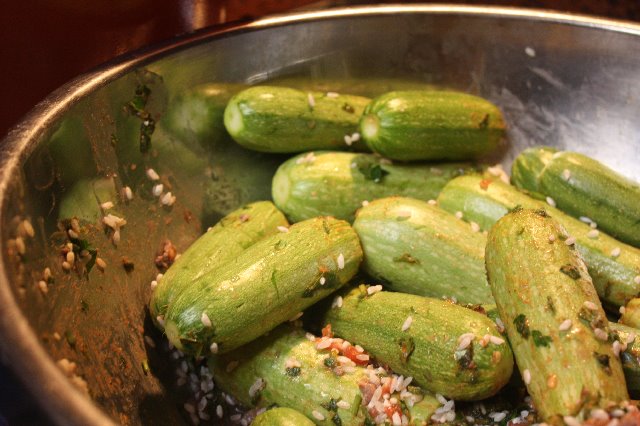 What you end up with is a down right Ethnic God Bath of fantastic flavour. The lamb and ghee are like barely discerning bass notes that sound out from under the melody of the tomato, parsley and spice. The texture is heaven, not unlike a wonton soup, you get the wonderfully rich and flavoursome tomato soup (into which the taste of the peppers and the cinnamon seeps) and then a piping hot zucchini shell with a wonderful arabesque risotto inside. It's a fresh light dish, but not too light, so satisfying, a bowl of it just makes you feel so well fed without being too full. Kieran, poor Irish lad raised on a steady diet of taters, had a fit trying this for the first time, said he'd never tried anything as nice in his life, and he was sober at the time, so I trust him. 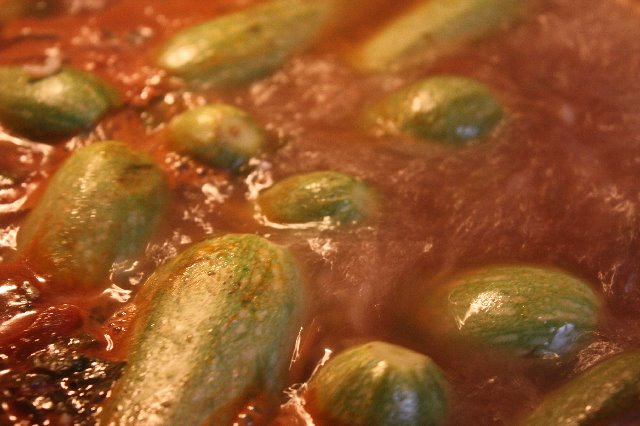 You don't even have to make this yourself. Mum loves cooking it for people, ask for an invite and she'll be happy to crank some out for you. Probably the best thing about making koussa is enjoying the aromas that fill the kitchen as it all comes gloriously together, maybe that's why we were born with Not So Little Noses.
Thanks Mum, being born to you is like a lifetime rez at Tetsuya's.
Abu Salim is at 151 Waterloo Road, Greenacre, ph 9740 4600, not far from the famed Greenacre Lebereatery: Al Aseel. Very kind staff work here, they'll be happy to help you find what you want, but don't let that stop you exploring.
Bellies will be dancing...
Posted by amanda at 5:06 PM