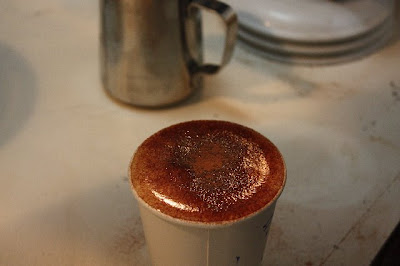 Coffee and Skinny Leg Jeans have something you might not know in common: I adore them both, but they're definitely not for me. Being a devoTea for many years now, coffee is something I only ever succumb to occasionally. Don't get me wrong, taste wise, I get it, it can be a thing of absolute and sublime rapture, but just like getting a car park in Surry Hills on the weekend after seven, its effects leave me a little bit Too Excited. Coffee is like a liquid roller coaster that renders my nervous system (already a proverbial tower of Pisa), that much more scattered and swaying in the wind. Compounds in tea, such a L-Theanine, act with the caffeine to have a much more delicate and energizing effect on the body, coffee is straight up Death Metal for The Mouth, just with a higher antioxidant content. But what good is a life free from vice? Even HowDoYouSolveAProblemLikeMaria had to trade in the quiet convent and the verdent hills for some saucy action with the Captain. So for those among you who remain resolutely faithful to the beautiful bean, and at last count there were about 5.7 billion of you, if you simply must do it, here's how do it well. 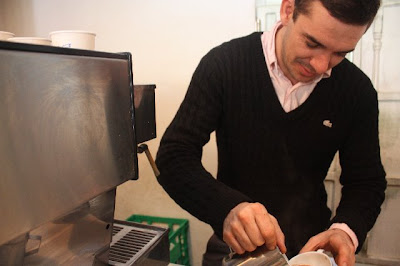 You remember Ardri, of Clipper Fame and Fortune? Well, it seems some Scotsman lay their claim on history by painting their faces blue and leading their men into unlikely victories through fearless battle, minus the trifle of underwear. Others, it seems, will be remembered because they make a damn good latte. Ardri (bari(SUPER)sta(r)), donning undies and a long way from Stirling Bridge, belongs firmly and fabulously to the second camp. This one knows pretty much all there is to know about coffee, and, in that accent that I can make out clearly just under half of the time, I found out all the Insider Do's and Do Nots for how to make and how to order a hellish good cup. Remember, foodie world is one place where you can judge a book by its creamy cover, indeed, people with too much time on their hands can usually tell a very good coffee just by looking at it, you'll never find a good cup that doesn't look Just So. 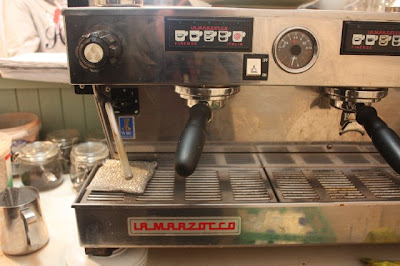 Coffee is serious business, this little shiny silvered beauty is a $12, 500 whiz-bang-barista-bling-twin-boiler-baby! coffee machine from La Marzocco. Twin boilers mean that there is one dedicated boiler for steaming (and 'stretching') the milk that makes a flat white, latte and cap ivory spun magic, and the second boiler is for piping out hot, Neroesque, aromatic SlapOfQuickQuickQuickToTheBrainThroughTheNose espresso shot after Ohhhhlfactory shot. Oh. That you don't use one boiler for steaming and shots means that each can keep its own distinct temperature consistently, ensuring a perfect coffee every time. If you walk into a cafe and you see a machine this technical, then you are probably, but not definitely, on the cusp of a celestial cup. 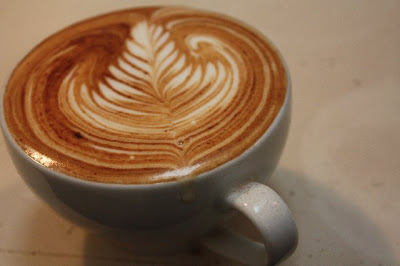 Now, unless you're ordering Soy milk, the top of a milky coffee should be a bit like Bert Newton's head, shiny and velvety. Good coffee has that lustrous flirty film of pearly light that dances around the the perfect curves of a dangerously brimming surface. If the milk looks dull or porous or too dry/foamy then it hasn't been stretched properly. Stretching is like DownwardDog for the mouthfeel of your milk, it's the technique of texturizing the milk by the way in which you place steam just on top of it. Just like picking up a boy in a bar (Heels, Little Black Dress, Flirty Smile), it seems there's a little bit of a formula: for a flat white, it's a 2 second steam, for a latte it's 4 seconds, and for a cappuccino it's 6. Good Baristas also take into account the type of milk, skim needs more stretching because it contains less protein and fat. Milk well stretched should have no bubbles in it, bubbles upset the texture and make for a less velvety finish. When milk is stretched just so it gives a nice thick and silky consistency to the milk and tempers, in amazing alabaster, the soaring richness of the dark coffee beneath, it also thickens it beautifully. Flat White's should be flat (you'd be surprised), and good baristas know not to make the milky membrane too thick or dense. A cappuccino is distinctly different, it's chocolate sprinkled layer should be generous in width and creamythick. The way the cup is filled is also an indication of the finesse of its maker, great coffee rises to its circumference like an ambrosial asymptote, it beckons towards you without actually reaching out, just almost approaching the edge and spilling over, never quite getting there. Back in my waitressing days, you could always tell who the better baristas were because when you carried the coffee made by a good one out, the milk would bulge and gleam but never spill, bad baristas would make poorly stretched milk that could easy dart in and out of the glistening surface membrane, and sometimes spill right on to the astonished laps of annoying customers. Or perhaps that was the waitresses fault... 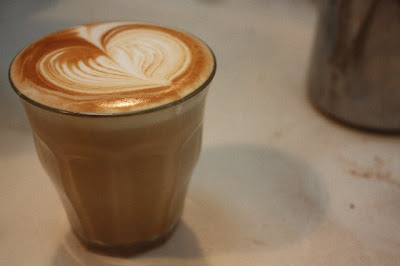 Like any good domestic in the Western Suburbs, coffee always begins with a shot. Ardri tells me that the biggest mistake people make with coffee is not grinding per shot. So if it's a double shotted brew that means each individual shot must be ground separately, doing this is what releases the fullness of the flavours. Fresh roasted beans are apparently not the best, contrary to what I thought. Adriano says that it is actually at 5-7 days after roasting that a bean comes into its true character, these few days are necessary so that the carbon dioxide from the beans can be released, this results in a nuttier and less acidic shot. 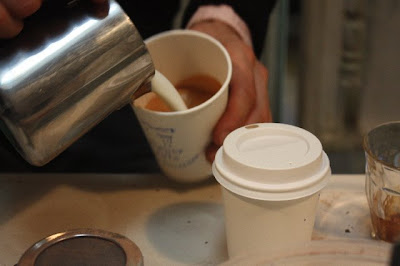 Ardri loves Single Origin blends from El Savador and Ethiopia, especially, but I was very interested to learn that it's actually in Vietnam where most of the world's coffee is cranking out from. A customer who was sitting by told us that it's served there from a tiny plunger contraption that sits atop the cup, they have no machines, and they finish it with a dollop of trickysticky condensed milk. Coffee in Mexico remains something i'd kill for, I tried it in the Cafe De Olla style, with panela, canella, cloves and orange rind, I had five in a row on the first night and poor Danny had to put up with one severely caffeinated Arab for a few hours ensuing. 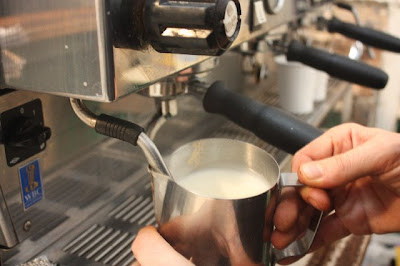 Swiss decaf is apparently the best, if you are so inclined. Their method of extracting the caffeine is a more natural one in that it involves the beans being washed over and over and left to dry in the sun, how nice does that sound! This tidbit got us talking about the most ridiculous orders ever taken, ready for this one: a double shot decaf soy latte, for someone whom I am fairly sure can not claim the mastery of arithmetic as one of their strong points. And the lovely Agnes looked at me incredulously as she recounted one regulars preference for a 1/2 skim 1/2 soy latte? Milk Identity Crisis, Maybe? The worst order I ever took was for a triple shot, double mocha, I nearly had dyspepsia just carrying out. Dirty, dirty people and all your delirious little kinks of cup... Adriano loves the more delicate coffee in the North of Italy. His favourite is at Cafe Trombolli in Rome, just near Roma Termini Station, although he concedes the standard in Sydney in considerable. He says they drink a coffee in the South of Italy called Robusta, much sharper and very caffeinated, and not much to his taste. Honest to goodness, Mexico aside, an ardri latte is the best coffee i've had in Sydney. He only uses brown sugar to sweeten, which is another good sign that you're onto something, white sugar is too acidic, too sharp, the gentleness of brown sugar muddles nicely with coffees smooth richness. Nothing grosses me out more than a sharp skanky brew laced with too much white sugar. Don't even get me started on artificial sweeteners. 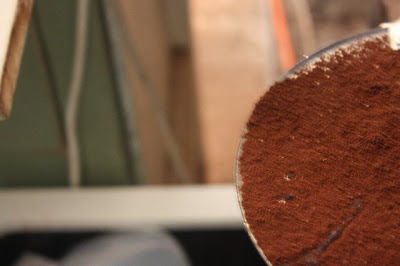 Coffee should always come with a glass of water by it's side. That's how it's drunk in Europe, it's good to put back in the water it takes out. Ardri has noticed the trend away from the milkier concoctions towards the short blacks and macchiatos. Macchiatos in particular are enjoying a new vogue. If you do drink coffee for the antioxidants, you're better off drinking an espresso, macchiato, or long black, as the dairy (milk) is an antioxidant inhibitor. 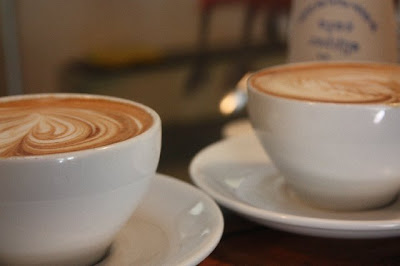 And the taste? It's like Elvis slowly crooning Love Me Tender directly into your mouth and down your warm, willing throat. It's DrowningGroundingSweetRichDeepWarmingStorming a liquid battle between darkness and lightness that always ends in a madness of melting. You are always sad when good coffee ends. The last sip is like the goodbye kiss of cherished lover. Ardri likes it better than wine. The Turks like it black as hell, strong as death and as sweet as love.
Much more than the drink itself, I like the way it draws people together or holds them in themselves, social or solitary, it frames simple moments. So from the dressing gown dreariness of The Nescafe, Get away! Coffee is an art, an experience, one of life's Great Respites. Get out and try new places and see how nuanced and different a thing it can be. Clipper at Glebe, is a hotspot, Bertoni's in Balmain, as well. Forbes and Burton serves some lovely single origin coffee, too. The Earth Store in Gould Street Bondi has the best organic coffee I have tried, especially when it's made by Nick and The Book Kitchen in Surry Hills has one I tried a long time ago and liked. It's a staple all over the world, but it's not quite the same anywhere you go. I like that.
Thanks again, ardri x.
Posted by amanda at 3:38 AM

Email ThisBlogThis!Share to TwitterShare to FacebookShare to Pinterest
Labels: 'how to buy...', bon soy, coffee, glebe

i love clipper cafe and grinding per shot is def the way to go< however not too sure about bertonis in balmain!!there coffee is very very bad and the milk tastes like they use long life..rock on clipper

I love this post ! Coffee is my life even I dont have much knowledge about coffee bean or machine but I like the smooth silky velvet milk froth in my coffee. Clipper is just near my house, pass by many time, never tried yet.. I will go try this week :D thanks !

I personally feel like adriano, I found the coffee in bertonis is ok but not impress me.

adriano....shameless promotion AND dissing the competition? guess thats why we love you.

go to clipper, bean! tell adriano that you dont like bertonis and hell give you free coffee for life!