[this piece comes with a CPD (crap photography disclaimer) poor lighting and general distractedness have resulted in these shoddy illustrations, please ignore] 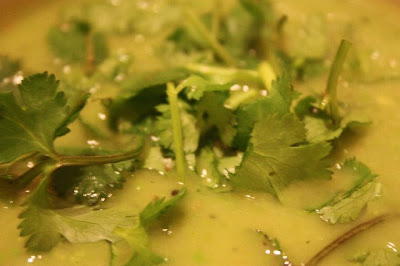 i dont believe in much, but i believe in soup. its taken me a couple of years to figure out how to make this most cunningly simple of concoctions translate from uh-huh, into ooh la-la. even when i think of the most elaborate meals i have ever had: dense, warm, wicked belgian waffles with organic hokey pokey and spiked caramel almonds, dracula-rare 40 day aged beef with obsequiously pleasing mashed potato and porcini butter, an earl grey infused dark chocolately Dessert Thing, really roasted chicken, succulent and crisp, and mum's roast garlic potatos, tessa-touched moist, yielding organic carrot cake with maple syrup, pecanwalnuts with a richrichrich dream in heavy cream lemonesque vanillaed cloud floating densely and velvetly above like a honeyed whisper from the distant heavens... soup, simple, unassuming, bountiful, beautiful, brothy frothy creamy soup, still releases from somewhere deep within me, the stillest, the most nostalgic, the most resolute, the most guilelessly golden of glorious sighs. all together now: 'ahhhhh'.
the quest to produce perfection from the pot has taught me most of my cooking cardinals, so much so, that i believe that if you can make a really fantastic soup, you can make almost anything. soup, real soup, is never a cheats meal, it takes time, a slower mind, steady hands and knowing how to layer kindred souls of flavour into and on top of themselves into a warming bowl of perfect union. soup is all about patience, which is probably only why it feels like so recently that i have come to grips with its subtle ways. like a composer who can make the music of an instrument reveal itself in a new way by timing it and pairing it with other sounds, conjuring the release of an entirely unique music, so too, should you be a little bit of a schoupbert (the jury was out on whether to embolden those letters or not, but hey, im almost 30, if i cant embrace my inner retard now, then when can i)? much like many of the beautiful things in this world, it all begins with the light of a match. soup is a meal that remembers the flame that it was made with. without getting too technical on you, gas flames really are the best to cook with. cancer studies (admittedly, Hippie Cancer Studies) have revealed how detrimental it is to cook with an electric flame, gas top cooking is said to produce a much more nurturative and steady heat that energises and heals. so if this is the type of cook top you have, great, if not, do what Posh Spice does and ignore the dodgy flame, keep going on with your life as is, (not) smiling (at all, ever). the strength of the flame is something to be mindful of throughout the whole process, in the earlier stages of infusing the herbs a heavier flame is required, but after that, i always take all the time i have (not so long now, when you think about it) to draw out the cooking, a very gentle flame left to warm a heavy pot will release a much more subtle and true flavour, no biggie, just crank it low, sweet cherry, and (if you're not ben, who tells us he has burned 3 pots of stew this month by falling asleep) go and do whatever it is you do when you're at home with something spicy a-cookin' on the stovetop. 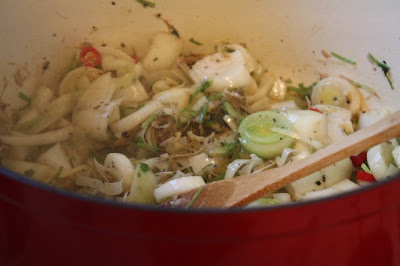 the pot is the next thing to think about. Dan has bought me a gorgeous, thick, french oven style pot in fire engine red (The Best Colour Of All Time), i have had to dub it my Little Comrade Marx for reasons two: firstly, its red and secondly, much like our Karl intended, it effects a very even distribution of resources (resources being heat) throughout the whole pot, so rather than just being overly hot in one place (a la Paris Hilton), your soup is heated evenly, all the way through (a bit like Anthony Kiedis circa Californication). i'll do a piece on pots soon (when exams are really close and i desperately need to procrastinate). if you have a crap pot, you can get a heat diffuser for about ten dollars, its a little thing you stick on top of the flame on your stovetop that spreads the heat out so its not so concentrated, otherwise, ignore me completely and move to the next step.
with the best ingredients you can find, select a simple medley. the biggest mistake i think i made with soup was an anything goes policy, if you chuck it all in it can taste okay, but i have had much more success when i choose just a few ingredients that i think will mosh it out quite happily together, and in they go. i have two main combinations, the second one tasted good in my head when i thought it up, actually trying it out was the birth of the best soup me, dan and dad have ever had (ask them, if you dont believe me). the first time i ever made this it came out the best, every version since then has suffered slightly from my propensity to be a bit of a zealot with ye olde ginger, beyond this, it is just about the best thing you could ever put on a spoon!  because it is a wholesome, hearty soup, with a strong kick of spice and sass, erin and i dubbed this baby Pea Arthur soup. we are both golden girls nuts, and, very saddened by death of someone so wonderful, this eponymous broth was born. its as good for you as Rose, gives you a hell of a Blanche kick, and you feel like a total Sophia whipping it all up! 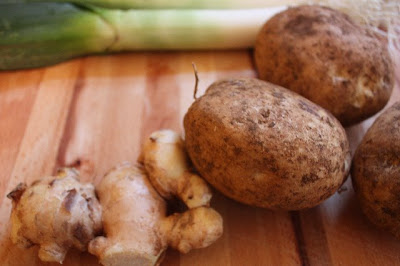 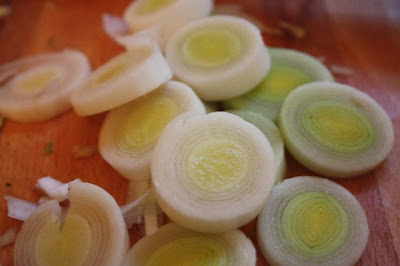 on a medium flame warm a good slosh of olive oil with some cracked pepper, some finely chopped coriander root, sliced chili and fresh grated ginger root, up to about one tablespoon for this amount is quite firey. the heated oil releases all of the favours of the herbs and spices, if its extremely cold weather or you would like a more warming soup, a knob of organic butter doesn't go astray either. after about 5-10 minutes of simmering, add the chopped leek and onion and turn the heat up a little, stir as they brown well, you don't want to add the stock until the onion and leek are very browned, otherwise the soup has too much of a tangy taste. by building the soup up in this way and sauteeing the leeks and onions you actually create much more depth of flavour than you would if you just chucked a bunch of veges into a broth. after the leeks and onions are hot to trot, i drown them in about 2-3 liters of low sodium chicken stock, freerange stock is preferable, but we have an economic crisis on our hands, so cambells stock'll do. escoffier (snobby french culinary god) said that stock was essential to cooking, indeed, its the soul of any good soup. soup made without stock or with a poor stock lacks depth and body, it tastes thin and leaves you wanting something more substantial. good stock lends so much character and life to vegetables, homemade stocks especially are great way to get more nutrients. 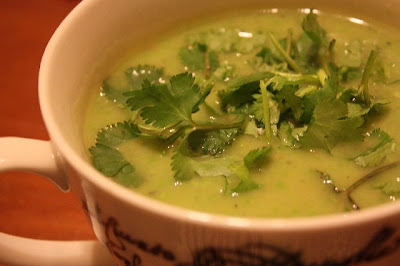 annnyway, turning the heat down very low, into this i add roughly chopped up, non skinned but thoroughly scrubbed potatoes (skin gives more texture and nutrients). this is the part where you go and wash your hair, watch some tv or 'read' the telegraph. leave it on low for as long as you can, ive simmered this for up to 3 hours, when the potatoes start to soften and to crumble up, i add the asparagus and turn the heat up a little more. 20 minutes or so later, i put in my whizz bang stick whizzer and puree the bejesus out of it all, while also adding  some more cracked pepper. when everything is smoother than Vanilla Ice, i add the frozen peas and leave them to defrostify for only five minutes before i commit baby pea infanticide to the third degree with the silver blades of my evil whizzer. not overcooking the peas gives a pure shock of green to the final soup, its like the english country side in a bowl, and it also allows the liveliness of babypeaness to shine through. peas are very subtle, they should never be mushy and dull green. a final crack of black pepper and lovingly ladled into a willing bowl with a neglige of fresh chopped coriander cavorting on top, and your taste buds will stop, collaborate AND listen. its so yummy and so rich, deep and light at the same time. a small bowl of this leaves you feeling full and energised, and the colour makes it so beautiful to eat. if gumby drowned in this soup, youd never find him! these measurements make enough soup for about 10 people, i leave some in the fridge and take it heated in a thermos for lunch, or have it cold, its a great way to eat your vegetables, much more interesting than on the side of some crucified slab of overcooked steak. especially as the weather becomes colder, having very warming ingredients like ginger in your cooking gives you a long lasting heat that seems to seep into your bones. like traumatic childhood memories of peeing in your pants, it really is a warmth that stays with you. its so comforting and protective, i feel great when i have good soup in my belly and im all rugged up and outside or inside on a cold, cold day. you feel so insulated, so beautifully aware of everything that you are in your own space. this is also a great meal to share with friends, having a few people sit around with soup and good chunks of bread and wine is a nice way to hold a thoughtful, deep space together, soup draws people in in a gentle way. eating pizza with a few people is so different from sharing soup together. i think i just made get togethers at my place seem both awkward and morbid. you guys are craving pizza right now, right?
Pea Arthur Soup, slurp it up x a 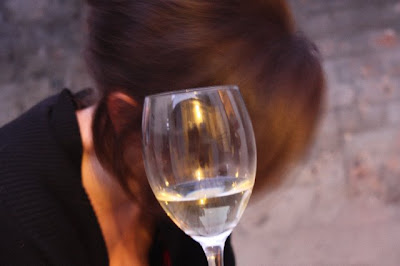 oh. I commented in the wrong place. Let me reiterate -- this is the best soup I have EVER eaten. I'd like to bathe in a big bathtub of Pea Arthur.

and id be honoured by you taking the time to comment again, but i think this is evidence of a general contracts based desperation

OMG YOUR BLOG IS AWESOME.

i'm going to have to read it after exams.