Love Supreme, AKA: The Stalker, The Scholarship Student and The Vietnam Vet 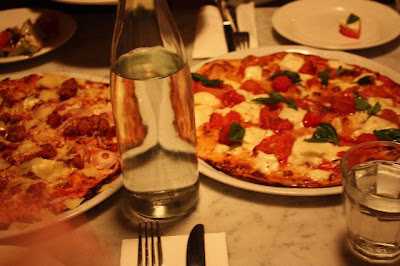 Pizza and Bert Newton have the unfortunate anomaly of sharing two things in common: cheesiness and a general inability to excite me in the least. The state of affairs in my increasingly shrinking jeans might lead you to think otherwise, but I have never been a pizza person. I find it very so-so food, something to be scoffed with beer and friends when you're really hungry and desperate, and despite a rather involved history with both hunger and desperation, I hardly ever eat the stuff. It's not so much the heaviness that deters me, but the fact that pizza is very rarely remarkable. Don't believe anything you see on cooking with Huey, great pizza is hard to make and even harder to find. Da Michele in Naples makes only two types of pizza and it remains the best I have ever tried, and here's why: they've had the odd century and a half to get it right. Yes, they've been in operation since 1870, apparently the hots for what's in the box with the dots is not a purely modern phenomena. Any money Benito Mussolini's dictatorship would have been a much more bloody and violent affair had he known what pizza would one day degenerate in to. 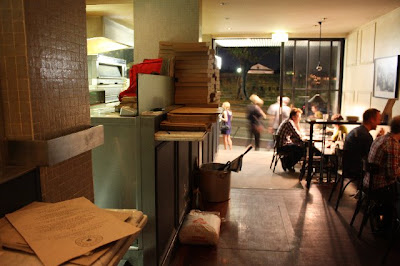 Now, the best pizza in Sydney is a contentious topic, Arthur's had it for a while and Mario's is one I keep hearing about but haven't tried. I used to like Oscar's woodfired creations at Grappa back in the day, especially their garlic crust, Rosso Pomodoro in Balmain is holding its own (with a fairly wicked nutella calzone to boot), as is a lovely, darkened, drunken, noisy and narrow dining spot in Paddington called Love Supreme. Their motto is "Emotional Pizza for One and All"... well, I like the idea of food that can relate to me, and with the sorely missed Miss Cindy back from her Vietnamese sojourn and the delectably demonstrative Mr Ronan's Philosophy scholarship to celebrate, a drunk, ill-organised and sweaty bunch of us converged upon 180 Oxford street for a night of lactose induced madness. 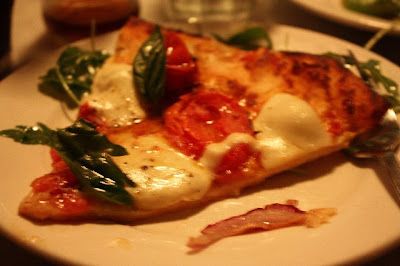 Love Supreme is a great place for big groups. It's loud, rollicking, busy and jovial, part dining room, part sourdough bakery/laboratory. Under honeyed golden lighting, big Silver mixers and whizzbangsomethingorothers adorn beautifully wooden and marbled surfaces and function as much as art as they do tools of the Delicate Craft of the Dough. LS takes its cues from the Naples school of dough, which prefers softer, chewier bases that sink under the weight of their luscious bounties, to the Roman, which usually involves a crisper base that retains its shape when you pick it up. Most of the better Pizza restaurants usually feature the softer, chewier bases, I don't think I can ever recall eating a crisp based pizza that was amazing. 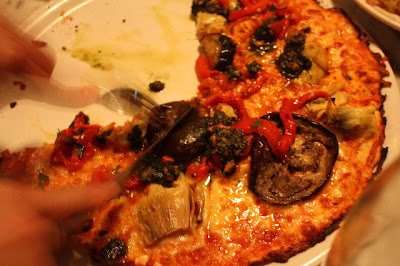 Now, it is a fairly impressive line up, but I have no qualms about playing favourites! Having 3 vegetarians present with us on the table (including the 'vego' who eats horses, our little Neigh Sayer, Cindy), did not prove a successful deterrent to me making a gastric beeline for my Italian sausage filled Favourite: The Smiley. The smiley makes you so, so happy. It's the beautiful result of sparse chunks of meaty, salty sausage, lusciously deep tomato, sparks of red onion and some divine pecorino (a hard Italian cheese made from sheep's milk) all kicking it back, lazy and lovely, on a beautiful, gentle base that crispifies in a perfect circle of crunchy pizza-perimeter. It's mouth sex. Cheesy, salty, meaty, spikey, but all balanced beautifully. LS uses impeccable ingredients, they ooze flavour, so there is no need for overcrowded toppings, the Smiley especially is the perfect amount of top to bottom, it cuts a culinary hourglass figure worthy of the envy of all. You can get all the pizzas in small, medium, or large. When dining with people who don't eat meat, I suggest you order the large and do your absolute darndest to pretend to struggle to finish it because you "can't stand wasting food". 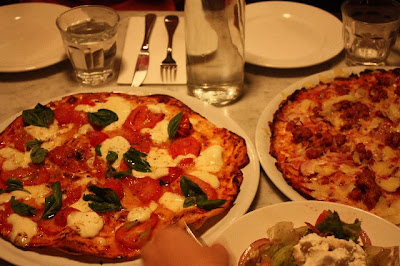 The VIP is a very ingestible pizza as well, adorned with fireenginered roma tomato, meltingly creamy bocconcini and oily leaves of fragrant basil, it is a classy classic, and, unlike my academic history, never fails to disappoint. Tostar is a beautiful bastard of a pizza, oven roasted vegetables mosh it out with some subtle goats curd, it's a generous and full bodied taste, without being too cheesy, which is the downfall of many vegetarian pizzas. The cheeses used here are gorgeous, because of the quality and the strength of flavour, less cheese is needed which makes for a much healthier pizza. I have also tried the Big Brother, which, as an organza in potato, gorgonzola and caramelised onions, is a hell of a lot more appetizing than my own. For the Fungus Amongus, Dario Fo has swiss brown, field and oyster mushrooms to wow you, I didn't enjoy this quite as much as the other pizzas, but it still cuts a highly decent slice. There's even a surprise pizza filled with ??? for the Cowboys among you that are living it fly-by-the-seat-of-your-pants style. 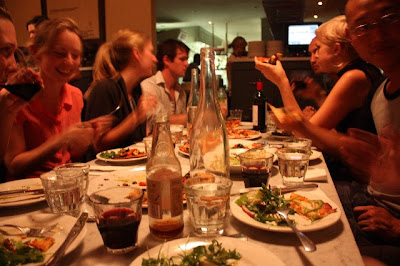 One thing all of these variations have in common is that top quality, organic ingredients are used very sparingly. When you assemble the topping on a pizza too uniformly, every bite tastes the same and it doesn't challenge the palate enough. Heh. Jesus. How Foodie Wanker did that one sound? Seriously though, when you place the topping sparsely and irregularly so that some bits are much more tomatoish, others more cheesy, others meatier still, it's a woven taste that digresses beautifully into and out of flavours, subtle, varied and generally more interesting and satisfying to eat. Food that tastes the same all the way through just becomes a bit of a succession of bites, you don't taste or enjoy it nearly as much. 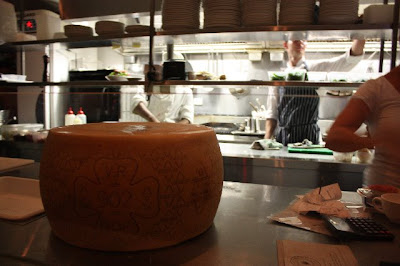 For those of you who want something nonpizzaesque: The Rigatoni with pork sausage and tomato or the orrichiette with zucchini flowers, roast capsicum, garlic, chilli and ricotta are yummy harbingers of Italian delight. Salads, antipasto and a little Bruschetta are also pleasant little belly fillers. Try the battered zucchini flowers with chilli, lemon and ricotta at least once, they're a little pricey but a novel idea and very delicious. The tiramisu and vanilla bean pannacotta are waiting for you at the end, surrender without a fight, there's no turning back now...
Love Supreme has my R-E-S-P-E-C-T. I have found out what it means to me! They use organic and biodynamic produce where ever possible and they are open 7 nights, just like my raging appetite. Brunch is running in the same kitchen on Sat-Sun, I prefer it as a night spot, although I have had some delicious Sourdough Sisters' breakfasts here with Tatsu. 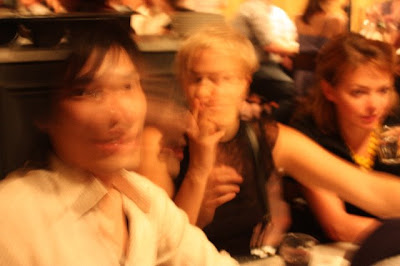 Love Supreme happens at 180 Oxford Street, Paddington. Call them on 9 33 11 77 9 and they'll tell you they don't take bookings, but they do do free home delivery, for those of you that have eaten too much pizza already and are far too doughy of leg to leave your house.
You know about the Scholarship and the 'Nam Vet, the stalker, you ask? Well... the Earth Cafe, which is the cafe I go to every day, was coincidentally having its staff christmas party at the table behind us. I get teased more than I should about how much time I already spend at that place, even the people who work there feel sorry for me, I actually had to tell them that it was mere chance that I ended up at their christmas party, and no, I am not a stalker. It was the darndest thing though, all night I was craving an earl grey in the worst bloody way...
Love Supreme, Delicious night out or the nemesis of Bikini Season: You Decide. 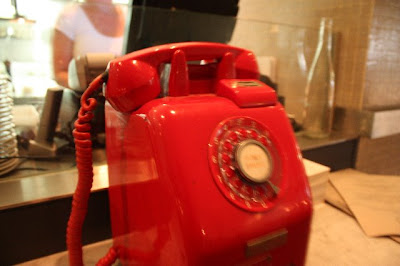 LMAO!!! LOve the bit where you were talking about pizzas with the topping evenly spread not evoking the palette as the taste becomes monotonous... such a food expert! =D

Holy cow girl where have you been? Jk I know it's been a busy time for you but I've been missing your posts!

I agree with the topping theory (and no it's not foodie-wankery) but the only thing I hate is if I pick up a slice with no meat on it. That's all I ask for...meat pieces in every square inch. :)

heh, karen, "meat pieces in every square inch", i have some vegan friends i want to run that concept by! Linda, linda, linda, when are we going to apply this food expertise to some georges cafe grub?