Where To Take Dracula on a Blind Date...(aka Australian Psycho) For those of you who have not yet had the pleasure, we Lebanese are a simple folk. We like our weddings big, our music loud, our conversations louder, our jewelry thickgoldheavygoldinyourfacegold, our gardens concreted over, and we really, really dig meat. There are certain cultures for whom red meat is a source of iron, of protein and B vitamins, not so for the former Phoenicians...red meat for us is a modus vivendi, a philosophy, a religion, a way of life. No wonder our bellies are always dancing! It's not mere culture though. I personally revere cows, so much so I actually worship them. Not in the Hindu way. In the I-own-9-leather-jackets-and-eat-crap-loads-of-steak kind of way. Yes, I like my cows in my stomach and on my shoulders, and for the best in-stomach cow experience, the Centennial's steak takes the cake. Steak and cake. For goodness sake. All the good words rhyme! And all of the bloody time!
This is the Centennial Hotel, Woollahra, and this is the steak + the knife. Forget the Melbourne Cup, kids, I have your real trifecta right here: 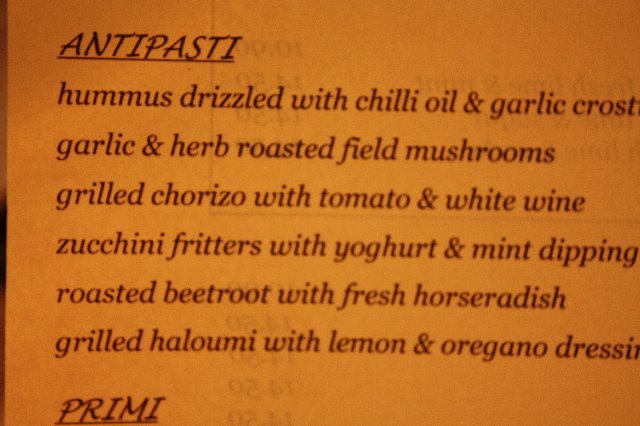 The most perfect, sublime and satisfying meal in Sydney goes a little something like this: 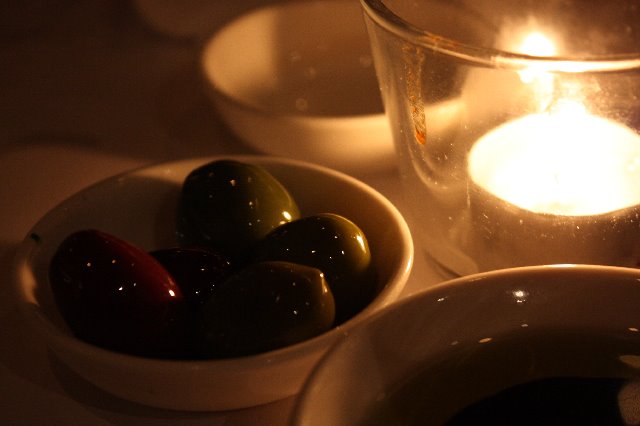 Everyone who has come to the Centennial always makes the same remark, that they would never have guessed the type of restaurant that's buzzing in the hidden back, from the, shall we say, less than impressive Oxford Street frontage. A classic case of books and covers. This place is all style, no pretension. The atmosphere is cavernous, candle lit conviviality, merry and warm. Laughter and wine and woodfired ovens and smiling people in happy groups. The wonderfully heavy, wide glass door that adorns the Victoria Lane entrance is your culinary rabbit hole, and the Alice Within you is beseeching you to step inside. At a slick kitchensideinsilver by a bowl of chubby pumpkins, a smiling person will check your name for the booking you were wise to make and usher you through the party that already got started to your dimly lit table. The lighting is gorgeous, but a proverbial pain in the lens for budding photographers. You should feel sorry for me, it took about 6 visits to the Centennial over the course of 3 months to assemble all the shots you see here. That's 6 steaks. 6 sides of greens. 6 versions of those sultry waffles. Honestly guys, blogging is such arduous, unrelenting work... 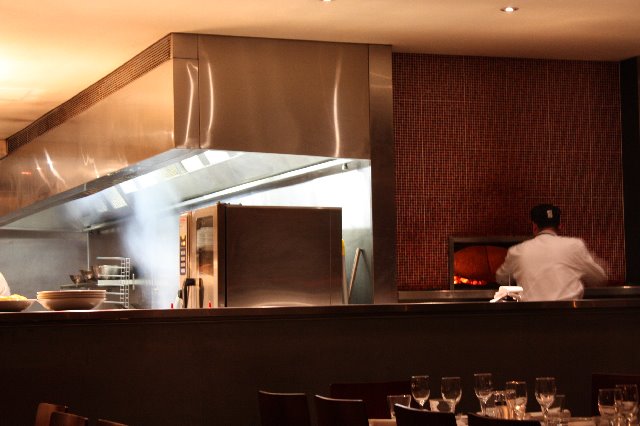 Like all deeply life altering experiences, this one begins with the olives and the bread. Warm sourdough bread with a little olive oil vinegar bath for your dippage and drippage. Rip and dunk and bite. Just like that. It's a good, strong olive oil too. Not one of those light flavoured welterweights that could be canola oil or something else. Olive and bread while you pour your thoughts through a longish wine list. Dad likes the shiraz by the glass here, and he's a big time fusspot, so I am guessing there are even more impressive drops lurking in the bottle section, but booze really isn't my forte, you'll have to wait for Cindy and Tats to sober up and start that blog. 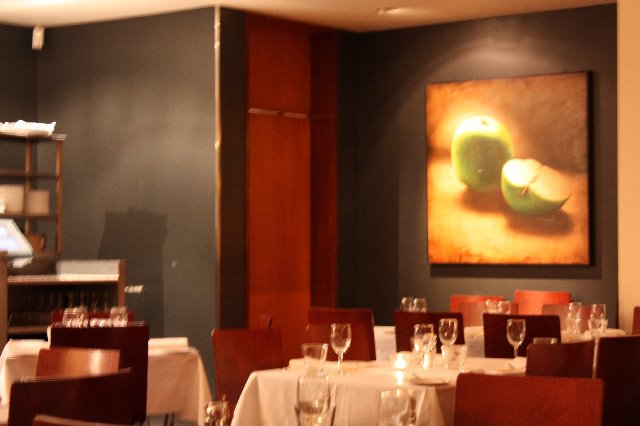 The menu is classic with a very Mediterranean twist. There's antipasto, haloumi chorizo and beautiful fried artichoke hearts are all nice onceuponatimes, there is also an interesting Pizza line up with none of the usual suspects. Dan's friend Dan got glassy eyed while telling me about a lamb pizza he had had here. Apparently it was like a meal of lamb on a pizza base. He was pretty gaga going over the details of how good it was. Can not confirm it, I have had the steak every single time. There are a couple of pasta dishes, chili and crab, and then, my pretties, you have the mains! 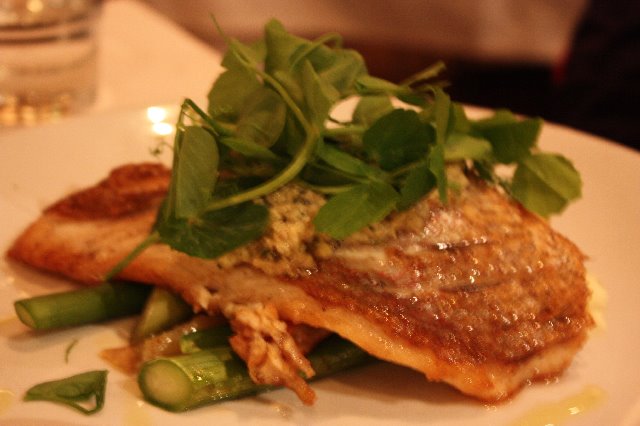 The main section on the menu is something I want to print out and put in the photo section of my wallet. All clean, perfectly executed classics. Garfish worthy fish, usually a Snapper with asparagus and lemon and potato, a lamb dish, which again, I have never tried because of that main of mains, could we please have a moments silence: Aged Beef Fillet with Porcini Butter and Spinach and Mash, Sydney, meet your definitive steak experience.
At just under 40 clams, it isn't as cheap as we are, but I solved that conundrum ages ago: it's big enough for two, so, invite someone with a much smaller appetite than you who doesn't really like steak and SHARE it! Voila: reasonably priced red meat nirvana as often as your fancy would have it. There is no longer any excuse to be anemic in Sydney.
The best runner up steaks I have had were at a place in London and at Prime in the basement of the GPO building in Martin Place. This won both out. Even steak houses in Sydney which claim to specialize in the stuff can't turn out a better, bloody slab of the red stuff than the Centennial chefs. It's simple, when I asked for details on how it was cooked, they told me they just rub a little oil on and let the heat do the rest. 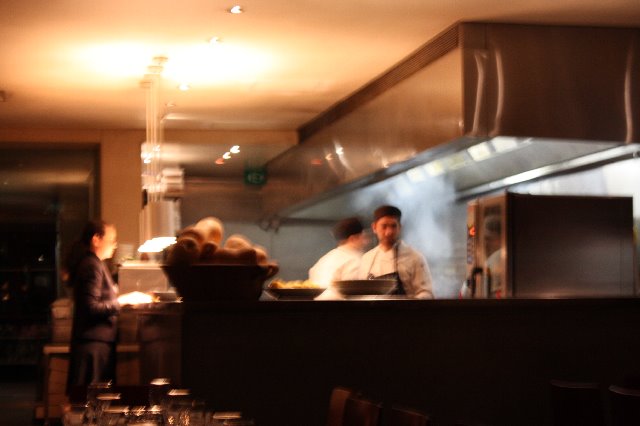 All amazing personalities need worthy side kicks, Batman had Robin, Maverick had The Goose, I have my Dad and Centennial steak has quite a few. Phenomenal mash. Honestly. Not too heavy or creamy, but not too light either, puffyfluffyairyfairy mash. The greens you will find under the side dishes are insane. I am not even going to bother with mature or poetic descriptives. These rock way too much for any of that! They never over cook the vegetables, the green of the steaming bowl is a singing, violent, shocking green, with crunch to boot. Why just have the potato in mash version when they also use it to crank out some wicked fries? Steak needs fries. That's what I tell myself any way. Go for complete carb overkill, it's really the only way to do it. 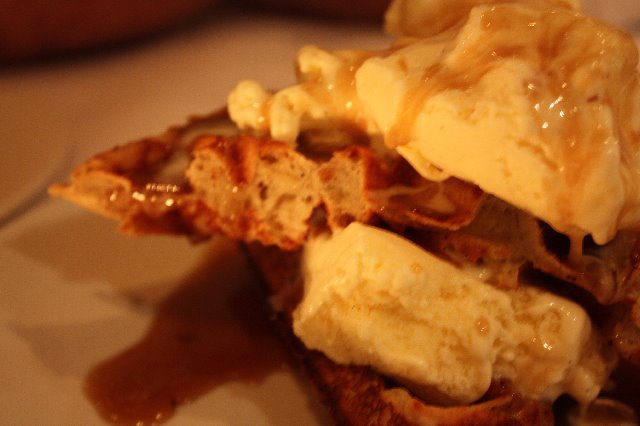 And the waffles. If you've never had a multiple orgasm then you just have not been acquainted with this baffling little confection. Beguiling thing it is. Such a simple dish, waffles, vanilla ice cream and caramel. Nothing you haven't heard before, right? But the way it comes together in this kitchen, upon your plate and on your palate is another thing entirely. Comparing this dessert to others is much like comparing your average female body to Sophia Loren. They both have 2 arms, two legs, roughly the same shape and function, but one is nice, and the other is an anatomical revelation, one is good, one is vavavavoom. Same deal here. These waffles have to be tried to be believed. You may order the Chocolate trio as a pleasing dessert to be had in conjunction with/as an adjunct to the waffles, but never, ever in place of.
Dinner is not over for true foodies until they have sipped and sampled from every round on offer. Wonderful Coffee and impressive Tea (always hot, never tepid) come with some in house Biscotti that is everything good biscotti should be: hard, moorish and pistachio studded, with what may or may not be a hint of cardamon...but by that point in the meal, ecstasy has overpowered any sense of discernment whatsoever.
Are you kidding me. This place sweeps you off your gobsmacked tongue with bite after delicious, wondrous bite. 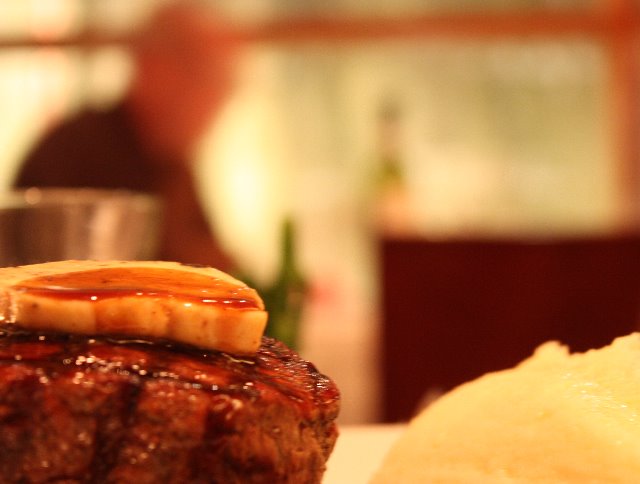 The Centennial Hotel, Woollahra: Give Moncur the cold shoulder and check out its funkier, much more freestyling little sister around the corner. Don't be fooled by what it looks like from the front, step your empty tummy in the side ally and through the big glass door, the perfect night of drinking and dining awaits you.
Dracula really would be a regular here if he was a local. It's all red wine, bloody meat, sexy desserts and sunken, shadowy lighting. No veganmacro munch spot, this is your High Temple of Carnivorous Rapture. It's the dark side of the force. So, coerce your secret lovers at gun point into your stolen getaway cars through red lights and head out here for round after decadent round, its the perfect alibi. 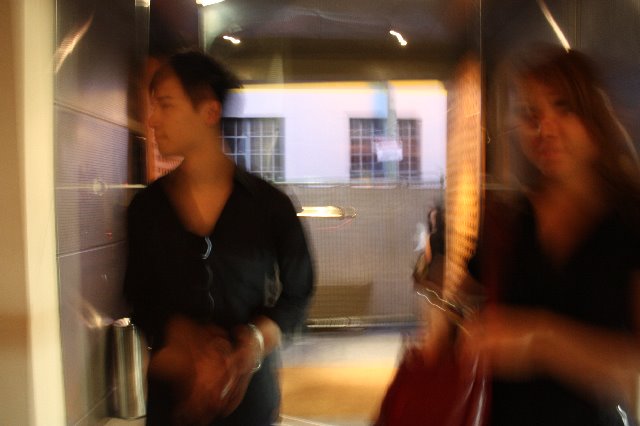 At 88 Oxford street, open for lunch and for dinner, contact them for bookings on: 9362 3838.
This was Cindy's farewell dinner. She's off to Vietnam for some flash flooding, she is also carrying some much needed supplies for her ailing brother, Sven. This vegetarian (who eats fish, chicken and horses), did us an honour by sampling some of the beloved cow. She was most impressed. We'll miss you cindy! Especially if things don't soon arrive in the mail.
The Centennial, Woollahra. Have a cow, man.
Posted by amanda at 4:30 AM

The best steak I've ever eaten was in Argentina. On close observation I discovered the secret ingredients. They are salt (lotsa salt) and a charcoal BBQ. The steak is salted repeatedly, but amazingly it doesn't ever taste too salty, it just gets a lovely seasoned BBQ flavoured crust. It can be recreated quite well on a Weber using half heat beads and half charcoal. Since my visit to the land of ham, cheese, steak, chips and no veges, every steak i've eaten has been reasonably bland. I'll be off to Centennial ASAP so I can compare.

hello again, save the centennial for the post exam dinner, we should meet up there and you bring your japanese knife and ill bring my german knife and we hack over the steak together? i had amazing steak in mexico as well, must be something about latinos and meat, people warned us the food would be dodgy but the meat was some of the best we had on the trip. have you recreated it yourself?