In Defence of the Humble Potato 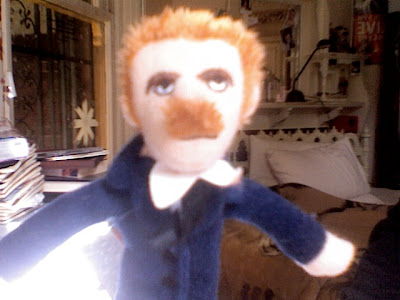 You can't claim to really, truly love a philosopher until you own them in finger puppet form. That's Nietzsche, my favourite thinker, writer, philosopher and psychologist of all time. Reading Nietzsche is punk rock. It takes any chair you are sitting in and makes it electric. Time and circumstance can not separate us, he is, has been and always will be, my philosophical godisdead father. Candice witnessed the stricken, digusted look on my usually controlled face when a dinner guest of my father's once tried to tell me that the gist of Nietzsche was that what doesn't kill you makes you stronger. Gist, gist, gist!? There is noooo frickin gist. Friedrich is a sea on a page, a sky between the covers, he is beyond reduction, beyond comprehension, all you can hope to do is to allow the magnitude of his mind to surround you, and to be awed. One of his (many) central concepts was the idea that things are neither good nor evil. That good, bad, ugly, beautiful is a mere interpretation of the world, and a narrow one at that. He believed that beyond this way of seeing things, were things, just as they are, and they are neither good nor bad, but rather good for what, or bad for what, things are what we place on to them. Our interpretation of a thing can not be divorced from its meaning for us, from our relationship to it. Just like Posh and Becks can't be divorced from each other, even though they really should.
Nietzsche would've been most frustrated if he lived in our times. I don't think he could've handled eating in this day and age, let alone living in it. Good fats. Bad carbs...no, no, no. Poor Freddy would've gotten incredibly hot under the mo and under the collar at all of those people who divide things into the good and the bad, and this is something i'm guilty of every now and then. And so, to honour this wonderful, hairy little German with the vivid eyes and the famous dancing madness, I am going to launch a beyond-good-and-evil defence of potatoes, a much vilified little vege that just wants a bloody chance! 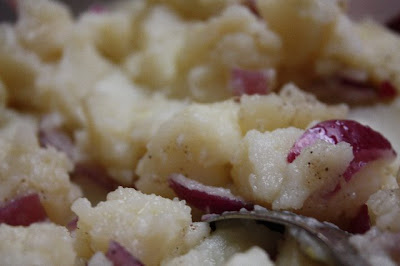 Potatoes are acidic. People with food sensitivities can find them uncomfortable to process, they share that similarity with tomatoes and eggplant, they are all members of the deadly nightshades, botanically linked to the poison ivy plant. The health conscious among us, even those crazy Irish, seem to be eschewing potatoes more and more, potato PR isn't great you see, they've been dubbed too carby, bland, white starchy, and with dangerous GI levels. Just like people, you've got to take the 'good' with the 'bad', and potatoes have a few great things going for them. Assuming you're not eating them in chip form (Mohr Fish makes amazing hot chips), or mash form (Centennial mmmmash) or Stolichnaya (Cindy that's you), all of the time, what you've got under that layer of muddy skin is a fiber packed, Vitamin C, Vitamin B6, copper, potassium and manganese power house, and all for relatively few calories.
Roy Navarre is a bit of a whiz bang plant geneticist who has identified over 50 different kinds of phytochemicals rocking it out in the humble spud, the phenolic content of some species actually rivals that of broccoli! This is good news for people with high blood pressure and people who want to do their body a nice turn. The antioxidant list is as long as it is boring, but impressive to say the least. A long time ago, I learned to view all natural, whole foods, as useful in different ways. When science dubs a fruit or a vegetable 'bad' for some reason or another, it usually does a complete U turn a few years later when a new approach is taken or a new type of compound is discovered.
Our generation needs a little more of the wisdom of the older cultures in this regard. Asian, Indian and Arabic cooking make use of so many different types of natural foods, they find moderation in variety, and enjoy a range of fruits and vegetables and pulses and oils that put the modern Western diet to shame. That being the case, I am going to share a healthy way of spudding it up with you, it's one of Mum's simplest and most devoured dishes, she literally makes it in 20 minutes or so whenever anyone has the urge. The urge gets had alot! So, get your potatoes off the couch and do this to them: 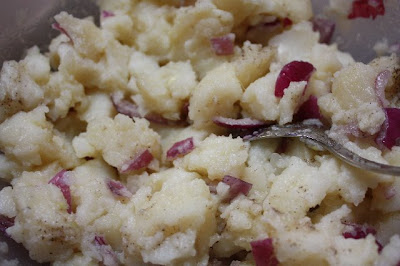 This one hails from Lebanon, so i think we'll call it:
The Fully Sick Salad and you will need:
4 or 5 potatoes (try different types for some nice textural variety, skins off)
lashings of olive oil (get a good, strong one, it blends sharply with the creaminess of the potato)
pepper (if you can get some Lebanese pepper it's that much more authentic)
purple onions
salt
It's easier than a dodgy back compensation claim: all you do is boil the potatoes (or microwave them, if you'd like to kill most of the nutrients), let them cool a little, toss in chopped onion, lots of oil and salt and pepper to taste. I am not going to lie to you, i've tried making this and it never tastes quite as good as Mums. She has some creepy ability to make it just so, she and no one else. It's a phenomenal tasting salad, and so simple. I love it on a hot day straight from the fridge. Mum usually serves it with cold boiled eggs for breakfast. The devout Lebanese among us use leb bread and not a fork to eat it. It's beautiful in any type of sandwich, I like it with dark rye and hummus. Mmm, it's one of the better things about being an Arab, kind of puts the Giant Nose Thing into perspective.
Try making it at home, perfect summer food, even nicer after it's been in the fridge for a day, the flavours settle in and make gorgeous taste babies. What do the rest of you do with potatoes? Share away, I need some more ideas. The Fully Sick Salad has to be tried to be believed, if your version fails then invite yourself and everyone you know over to my parents, they don't need any notice at all to cater for hundreds. It's kind of embarassing.
The Fully Sick Salad: so yummy, it would've brought Zarathustra down any mountain much sooner. And Thus Spake Amanda.
Posted by amanda at 9:02 PM

Email ThisBlogThis!Share to TwitterShare to FacebookShare to Pinterest
Labels: salad

yeah yeah! Amanda hurry up and finish your exams so I can give you a sampling of the olive oil I have here - sent over in big tubs straight from the 'in-laws' olive plantation in Kalamata. Its almost as black as petrol and is so so full of flavour. Works wonderfully well in the Greek's potato salad, which is remarkably similar to the Leb version, with only the only addition being crushed garlic. They leave the skins on as well.

Still working on the moussaka. And the pomegranate. And the photo of my knife. Maybe I can work it into one spectacular work of art.

And Thus Spake Amanda. The potato is most certainly not dead (unlike GOD).

haha. black as petrol? i love the sound of this. you cant torture a lebanese person with olive oil, it isnt fair. exams die this friday, i can not wait! crushed garlic sounds divine, theres nothing better than offending people with the smell of your breath AND having a great lunch. we will be so happy soon. how was hobart?

good luck with the exams...hobart was wet and cold and I learnt lots about root canals. We appear to have organised ourselves a few dozen different food outings which means a lot of exercise for me to offset the calorie intake. I call it my fat offset omissions trading scheme. We should start a Cake + the Knife food club.

Thank you for your dig at my attempt to describe the oil. I had another look and its actually dark green (not surprisingly). The potato salad combined with a some BBQ oregano/garlic/oil/lamb cutlets and a few spoons of tzatziki = what I like to call 'stink lunch'. I can't wait for us to both stink out a soon to be designated location.

...and its 5km radius! c + k club sounds like a great idea, i think dan and anna from school would be up for it, we could do a new place every month or fortnight or something, i am hungry and over histology!!!