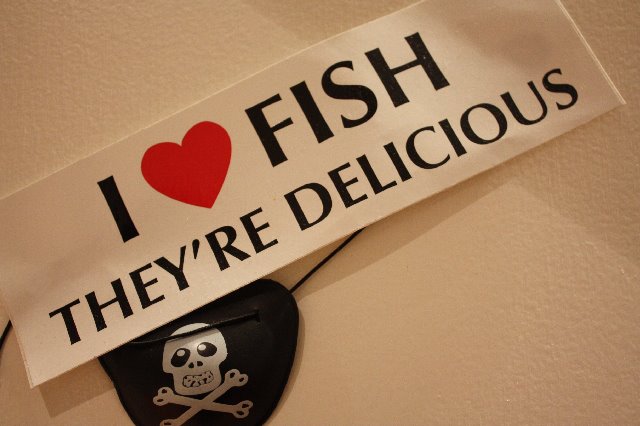 Zeb likes fish. They're delicious. That sticker takes me back to the good old Norton Street Days. One house, four kiwis, lots of boxer shorts, beer bongs, bbqs, random blasts of nakedness, tom walking out mid conversation or showing his tail bone, gretch cooking pasta and looking at scary magazines, mat brushing his teeth and eating perky nanas, cosby falling through the odd roof sort of fatally injured then getting up and looking for a beer anyway, semi naked accordian playing to late night bus commuters, the weird and very evil smell in the kitchen that never really went away...... and all of it to Bleed American. 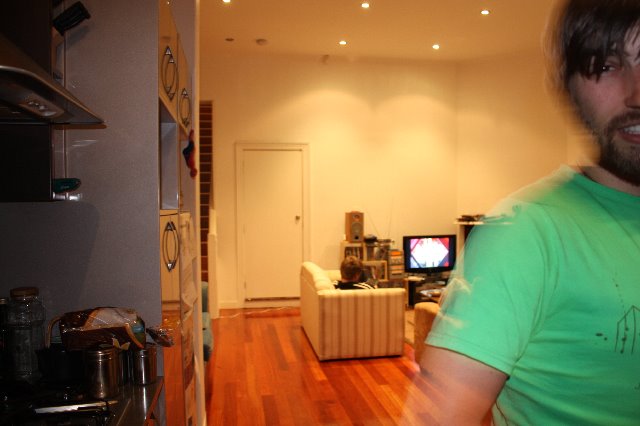 Zeb and I got off to a shaky start, I made the mistake of telling him what I actually thought of the plot of Dawn of the Dead while it was playing, he waited a moment, made some small talk, and then left the room. oops. Our bond was made of sterner stuff though, so after getting to know each other and a lot of heart to hearts over 2 years, i think we've finally got some good loving going between us. I should probably be entirely frank with you about something: Zeb likes seafood the way most normal people I know like sex. Don't get me wrong, he enjoys sex as well, but it's just not the same. His father, Chaddy, is a very eccentric formerboxerfisherman from NZ who defies any description whatsoever, I have met him and I still don't quite believe he exists. Suffice to say Chaddy has a dog who can fish. Yeah, no joke. This has alot to do with why Zeb knows most of what there is to know about things that come from the deep (he was slurping muscles from a little tub while we discussing his love of seafood, should there be any doubters remaining among you). We caught up for a mutual sob over our brokenheartedness in Newtown a while ago when I realised he was blog gold begging to be mined. He promised me he'd show me how he smokes a mackerel. Actually, I made him promise me he'd show me how he smokes a mackerel, the things I do for you guys... 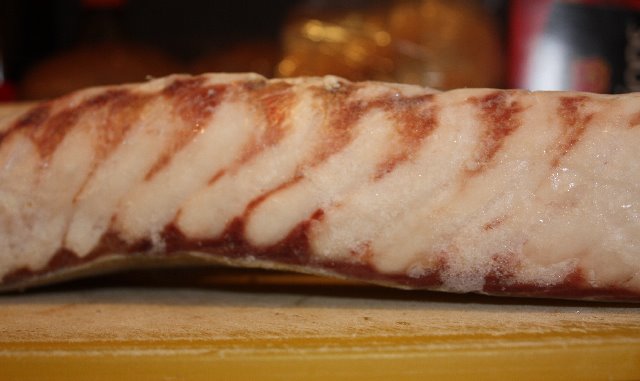 So that's a Mackerel, boys and girls. It's not just any old mackerel, either. It's a mackerel from Zeb's nephew, which he procured from a boat in Cairns that supplies all the other boats that fish in the area. Sounds a bit mafioso doesn't it? Keep it between us, now, we want to eat the fishes, not sleep with them (yeah, tragic, but as if I could resist!). The fish was frozen, and has to be preped before it's cooked, usually a day before. 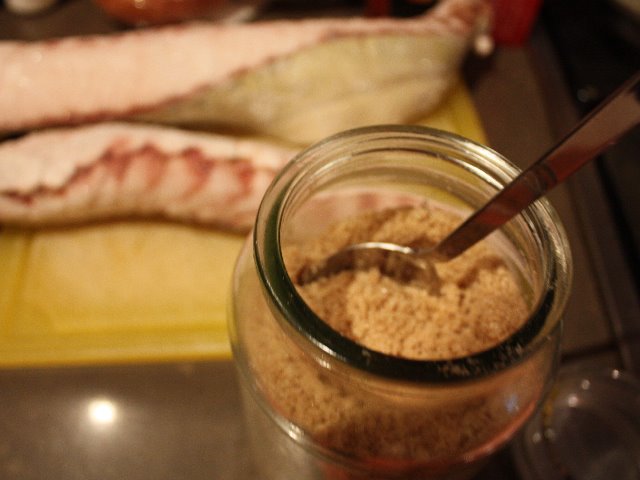 That jar is a 50/50 mix of salt and brown sugar. I wanted to try a spoonful but I didn't. Zeb showed me how he gets these mammoth fillets of mackerel and rubs this salty sugar into them in generous amounts, then wraps them in gladwrap and puts them in the fridge over night. The fillets absorb all of the salt and sugar beautifully. When I saw the fish come out the next day, it had a glistening, delicate pinky colour that I found surprising after seeing how white it looked frozen. 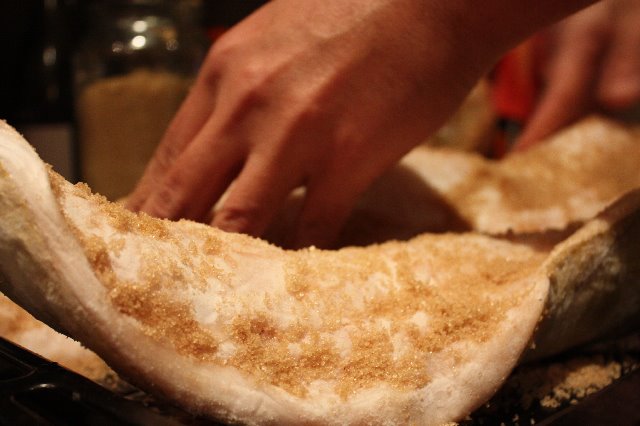 It was very simple to do, nothing complicated at all. He took the soft fillets and laid them out in little fish cradles he made from foil. The tricky bit is this: Zeb has a whizz-bag little smoker thingie. It's amazing, cheap as "chops" he told me, they retail for about $100. I didn't check the brand, but knowing Zeb Raymond Chadfield, I am almost positive it was a Mac. The fish smoker is so nifty to watch being lit up and assembled, i'd love to get one one day. The really exciting bit wasn't the smoker or the fish though. And here's the gem... 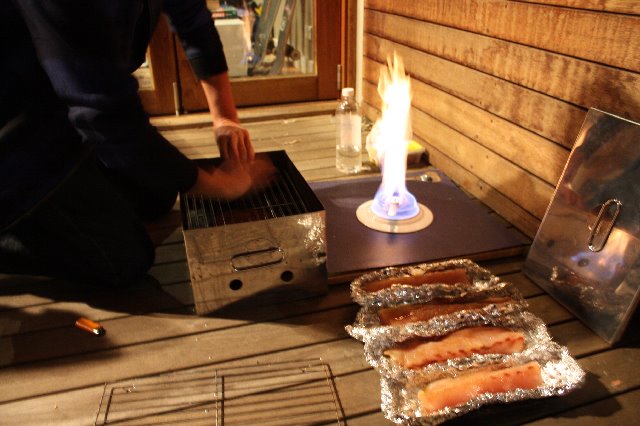 Zeb, get ready for it, used manuka wood shavings from New Zealand to smoke the fish!!! Holy Hell. Esoteric and Obscure little quirks like that are my whole justification for living this sordid life. I watched in awe as he took out this delicate little bag of shavings and told me to smell the contents, it was beautiful, deep and woody, it reminded me of being at Muir Wood in San Francisco with Dan, you know that smell that's just inherently green and wholesome, that was it. I image it's a tad like having a rain forrest up your nose..sublime. So these shavings go into the little smoker and as it all burns and smokes the fish (the actual smoking doesn't take very long, maybe 20 minutes), you get the most divine smell, a mixture of manuka and fish and some sweetness. Katie and I were salivating on the porch. It was all happening under this magically gentle porch light glow in the night, the golden-ness of it all and seeing Zeb work his magic made me feel like some lucky 6 year old whose Dad take them camping for the first time (this is all going on Enmore Rd in Newtown, mind you, so that's no small feat). 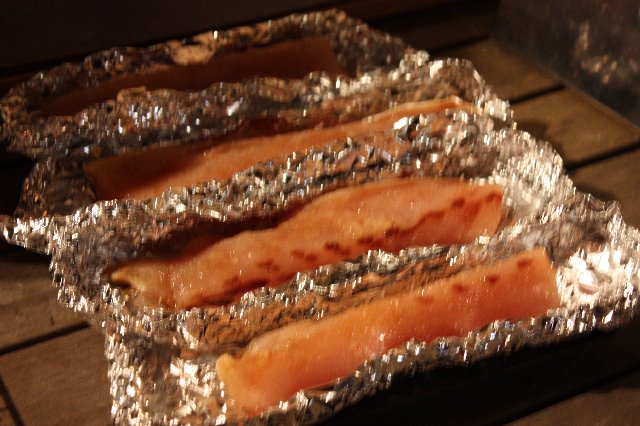 The fish was served with a beautiful salad, it was lovely, you could taste the smell of the wood so cleanly, it was a good balance of flavour for what is quite a meaty fish. I like my fish rarer than Zeb does, but that being the case, it could just be smoked less to suit individual tastes. As if that wasn't enough, we had some of the most beautiful bugs i've ever tried. Zeb sautees them in cream, dill and onion in a shallow frying pan for a little while. The cream and the dill blend winningly, sharpness and richness canceling each other out in beautiful harmony. We had some wine from Nelson as well, while a life sized, cardboard cut out of Buffy and some South Park kept us entertained. Classy bastards, aren't we. Hey, don't say anything... but Buffy didn't even have any salad, frickin anorexic actresses make me sick. 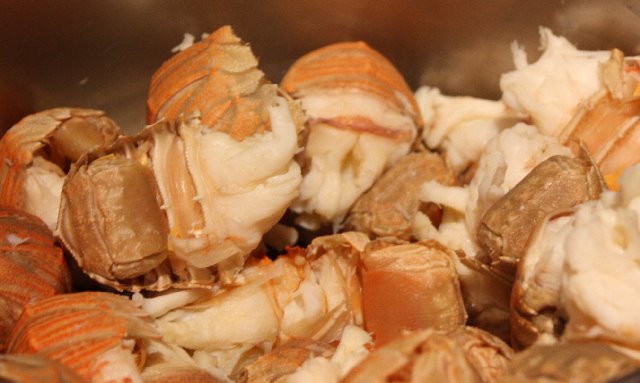 Thanks, Zeb. You can share the treasures of the deep with us any time. For Chez Zeb opening hours and menu listings, simply direct yourself to facebook and enter Zeb Chadfield. It's the perfect place for some good fish, some kiwi tales and some star watching.
You don't leave for London til April, but I am going to wish you the best of luck in the UK, you're one of the most hard working and driven people I know, there's no way you won't make in London...and if you don't, i'll join you under the sea. There'll be no accusations, just friendly crustaceans..under the seaaaa. xxxx
Given that their new album is called Upstream, which makes it highly fitting in the midst of all this tomfishery, here's a link for the band Between the Devil and the Deep where you can get their new album, haven't heard it yet but these boys are just so lovely you should get one anyway: here.
Posted by amanda at 5:34 PM